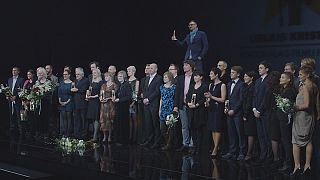 <p>The <a href="http://riga2014.org/eng/" rel="external">Latvian capital Riga</a> was one of the <a href="http://ec.europa.eu/programmes/creative-europe/actions/capitals-culture_en.htm" rel="external">European Capitals of Culture</a> in 2014. </p> <p>Several cinematic highlights marked the end of the year. Riga hosted the ceremonies for the European Film Awards and Latvia’s National Film Awards, which followed the International Film Festival.</p> <p>Latvian director Janis Nord’s film ‘Mother, I Love You’ received three ‘Great Christopher’ (Lielais Kristaps) awards at the end of the Film Festival.</p> <p>It received the ‘Best Film’ award as well as ‘Best Feature Film Director’ and ‘Best Actress’.</p> <p>The story centres around a young boy and his mother. Raimonds is a music-school pupil who starts to delve into petty crime. His mother finds it increasingly difficult to control his behaviour.</p> <p>Nords studied film directing at the <a href="https://nfts.co.uk/" rel="external">National Film and Television School</a> in Beaconsfield, UK. The 32-year-old directed his feature debut ‘<span class="caps">AMATIERIS</span>’ in 2008.</p> <p>When asked what was needed to become a director, Nords replied:<br /> “I think one of the main characteristics of a director is patience. Working and waiting long years before the movie is made and then patience with the actors, with the crew on the set… Because, basically, shooting film is just a process of endless repetitions: take one; take two; take three. Let’s change an angle: take one; take two. Repetition, repetition.</p> <p>Vita Varpina played the single mother in the film.</p> <p>It was a movie debut for the 46-year-old theatre actress, but at the awards ceremony she said she would like to work with Janis Nords again. </p> <p>Speaking about playing the role of a single mother, she said:<br /> “I have two kids by myself. They’re just a little smaller than the child in the film, but I think in movies we illustrate what happens to us in real life. My kids also don’t always listen to me and sometimes I become impatient. But being a mother requires patience.”</p> <p>The ‘Best Actor’ award went to Janis Amanis for his role as basketball and football coach – and national sports hero – Valdemārs Baumanis.</p> <p>‘Dream Team 1935’ is based on real-life events. It tells the story of the Latvian basketball team’s victory in the 1935 European basketball championship, then known as ‘Eurobasket’.</p> <p>The film also won awards for editing and costume design.</p> <p>Veteran Norwegian actress and director Liv Ullman presented two lifetime achievement awards to husband and wife team Ivars Seleckis and Maija Selecka.</p> <p>They have spent all their professional lives working on documentaries, either as a director and cinematographer (Seleckis) or editor (Selecka).</p> <p>The National Film Awards are presented every two years. This time, the ceremony was moved forward from its usual springtime slot to coincide with the European Film Awards.</p> <p>Euronews correspondent Wolfgang Spindler reported from Riga:<br /> “It’s a very important moment for the Latvian film industry. Not enough homegrown films are produced yearly to warrant an annual ceremony.</p> <p>“But many of the few movies made go on to be successful at film festivals worldwide. They also have strong box office takings within Latvia.”</p>