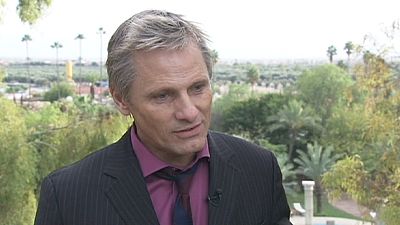 <p>Since he first hit the big screen in 1985, he has impressed both mainstream and art-house audiences alike. As a result, the Marrakech International Film Festival has payed tribute to <a href="http://variety.com/2014/film/festivals/viggo-mortensen-talks-about-jauja-and-far-from-men-1201373247/" rel="external">Viggo Mortensen</a>. The US-Danish actor spoke to euronews of his delight and the award and his career.</p> <p>“It is very flattering and I also hope that it helps bring attention to the movie I am here with, ‘Loin des hommes’ (‘Far from Men’). It is a beautiful story, which I am very proud of and which we shot not very far from here and I wish I had more time on this visit to go up in the mountains where we filmed it,” said Mortensen. </p> <p>“Every actor has a different journey, you know. I had many years where I did not have access to that many roles or many options in terms of scripts or anything and then, obviously, like everyone else involved in ‘Lord of the Rings’, when that trilogy kind of exploded, even after the first part of it, it was such a worldwide sensation and box office hit that a lot more doors opened. But just because you are lucky does not mean you make good choices,” he added. </p> <p>About his role as Sigmund Freud in ‘A Dangerous Method’, he said: “I enjoyed playing Sigmund Freud, a character that expresses himself, that seduces, that defends himself, that attacks, that does everything with words, through words. I certainly learned a lot more about him, and I enjoyed finding out that he had a good sense of humour, and just things about him as a family man and just many aspects of his life I was unaware of. “</p> <p>Deliberations are underway among members of the jury to decide which of the 15 films in competition will take the top prize. <a href="http://en.wikipedia.org/wiki/Isabelle_Huppert" rel="external">This year's president is French actress Isabelle Huppert</a>. </p> <p>“There is debate among members of the jury, of course, and we don’t all agree. So everybody speaks out and gives their opinion, and then we vote. And that’s when the festival really reflects what cinema is all about, it’s a window on the world, which deals with vast and ambitious subjects,” she told euronews. </p> <p>According to jury member, Indian director Ritesh Batra: “When you are genuinely moved by a movie it has taken you to a place where you question yourself. It is when the person who has made it has invested themselves in it, personally.”</p> <p>For Italian film director and screenwriter Mario Martone, also a member of the jury “what matters is a film’s credibility, its connection with reality, it doesn’t have to be extremely inventive or imaginative, but it must be credible”.</p> <p>While he was obviously limited in what he could say before the winners were announced, jury member and Moroccan director Moumen Smihi said he was delighted with this year’s rich programme, adding with a smile: “It is very difficult to talk as a member of the jury, to answer to this question. I have nothing to say.”</p> <p>Also on the jury, British actor and director Alan Rickman said: “I know that making a movie, as somebody said, is like going to war, I know how much courage is required by the director and the whole team. My heart is with them.”</p> <p>Euronews will bring all the latest on the winners of this year’s Marrakech International Film Festival.</p>