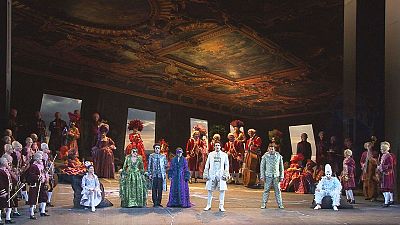 <p>What is one of the greatest music masterpieces was staged recently at Vienna’s Staatsoper: Mozart’s “Don Giovanni”. Defined as a ‘dramma giocoso’, a joyful drama by its composer, it’s a complex, choral opera, made immortal by unforgettable arias and characters.</p> <p>“Don Giovanni” was composed just before the French Revolution, and it is affected by the social and cultural atmosphere of that time, as French conductor Alain Altinoglu confirmed.</p> <p>“You can feel the French Revolution is in the air… also the libretto has a sort of subversive element. For example: when Don Giovanni tries to seduce Zerlina, the peasant girl, there’s the famous duet “Là ci darem la mano”… it’s like two different social classes coming together… the impending revolution is shown also by this character coming from below who aspires to access high society,” he said.</p> <p>Don Ottavio is interpreted by internationally acclaimed French-Mexican tenor Rolando Villazon.</p> <p>“Don Ottavio is Don Giovanni’s mirror image. He’s the nobleman who follows the rules and abhors barbarity, and actually is surprised to hear the accusations against Don Giovanni; he’s a respectable person who sticks to the rules of his class, the aristocracy,” opined the tenor.</p> <p>This opera abounds with very well-known pieces, such as the aria of the ‘catalogue’ of Don Giovanni’s mistresses, as revealed by his servant Leporello.</p> <p>“In this Don Giovanni I do a few unusual things… such as playing the recitatives on the Hammerflügel – the fortepiano, as Mozart used to do. This enables me to be closer to the singers, and also to play, and improvise! Tonight it’s the fourth performance and I can afford to have some fun… I quote Mozart, for example, and have people guess which piece it is… I just enjoy doing things differently!” enthused the conductor.</p> <p>“Artists do have difficulties but these should be welcomed, and thought over, and sorted out! And one should be thankful it’s this sort of difficulties because if you open the papers you will see what the real problems are… Our difficulties make us better artists because if you integrate them into our experience you can get a much better insight of the character you interpret, as well as establish a more direct and deeper contact with the public. I am so happy to add to my career and to my operatic, artistic experience this role of Don Ottavio!” concluded Rolando Villazon.</p> <p>Rolando Villazón has just published a new album: “<span class="caps">ROLANDO</span> <span class="caps">VILLAZON</span>/MOZART, Concert Arias” (Deutsche Grammophon).</p>