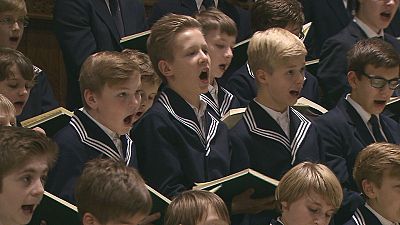 <p>Few of the world’s great boys choirs have the pedigree of St Thomas’ in Leipzig. Neither war, nor plague or isolation from the outside world could silence its voices.</p> <p>“I think that the first beat of the kettledrum and the beginning of the choir singing: Jauchzet frohlocket, is something that always stays in your mind. When you sing Bach your body really vibrates, this rhythm just grips and enthuses you,” says choirboy Oscar Didt. </p> <p>Oskar is a member of the latest generation at the 800-year-old institution, where once Johann Sebastian Bach himself was choirmaster, so he is central to their repertoire. </p> <p>The Christmas Oratorio is one of Bach’s masterpieces, composed in 1734.</p> <p>For 27 years he taught the St. Thomas church choir. In the early years the weekly discipline of writing a new cantata helped make him one of the most prolific geniuses in history, .</p> <p>“His spirit lives on through his music and you can feel it. We are blessed that we have Johann Sebastian Bach as a constant source of inspiration,” says Georg Christoph Biller, <br /> the 16th choirmaster since Bach. </p> <p>Some 100 boys and young men aged between nine and 18 live under one roof in the boarding school. It is a tight-knit community and it is all about singing, even squeezing the first song of the day in before lunch. </p> <p>With such a heritage and pedigree, the choir sets very high standards.</p> <p>Tradition, discipline and team spirit are the pillars of this 800-year unbroken existence so growing up here means taking on responsibilities, too.</p> <p>“What makes the Thomas Boys so special? Mainly something that is maybe not so obvious from the outside: there are strong relationships between the older and younger choir members. We have a unique education system where as well as the teachers, the older students take care of the younger ones, educating them, so their experiences can be passed on,” says Oskar.</p> <p>The choir puts its heart and soul into continuing Bach’s legacy. </p> <p>“When you sing his music you have to pronounce the text precisely and put a lot of effort into it. You can’t sing it halfheartedly. You really have to embrace the music,” says co-chorister Max Gläser.</p> <p>Choirmaster Georg Christoph Biller says in a way Bach’s qualities ensure his longevity. </p> <p>“I think what characterises Bach’s music is that on the one hand there is a deep devoutness to it but on the other hand his music is completely universal. Bach’s music can be seen as a bridge between different worlds, giving people a chance to connect.”</p>