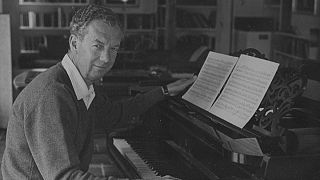 “Peter Grimes”… on the beach! Benjamin Britten’s opera was one of the key events at the latest edition of the festival he created in the late 1940s in Aldeburgh, a fishing village that inspired the opera and where the artist spent most of his life.

Benjamin Britten was an acclaimed conductor, an accomplished musician but above all one of the major composers of last century, and 2013 marks his centenary.

His personality and the Suffolk region are tightly intertwined.

World-renowned as an outstanding year-round performance centre, Aldeburgh is also a place where artists at all stages of their career can be inspired.

Jonathan Reekie is Chief Eexecutive of Aldeburgh Music: “There is something about his music that reflects the coast and the sea. There’s a kind of sense of light and space in some of his music, and I feel that perhaps comes from somebody who wants to be by the sea. It’s a very open landscape, it’s very flat, the skies are big, there is a wonderful changing light here…a kind of simplicity, austerity, that is so special about it here.”

As Britten’s career as composer and conductor developed, so did his festival grow from a high quality but still local event into an internationally famed rendezvous.

“In the 1970s, with his partner Peter Pears, they realised there was a real need to support young professional musicians. So what you have here is a huge, year-round musical centre with young musicians at all different stages of their development, coming here to be inspired, try new things,” said Reekie.

A centenary masterclass devised for young but already established musicians has been recently devoted to Britten’s String Quartets.

Cassandra Hamilton is the leader of the Bernadel Quartet: “So much of his writing is so intimate, and you have to keep it so close to yourself before he lets you give it away.”

“During breaks I’ve just been walking up and down the beach, it’s so silent there, it’s amazing, you don’t
“I’m always amazed by the richness of his legacy: for me what’s exciting is not only the obvious fact that he was a great composer and wrote lots of wonderful music, but he was an extraordinary impresario. So many of his ideas were quite radical, ahead of their time: his ideas of music education, and the role of the composer in the community… he was doing that before other people in Europe!”, adds Hamilton.

In the last bars of the Third Quartet, which Britten composed at the end of his life, the music freezes on an unresolved chord, a “question”.

For Hamilton, there is no simple answer: “I think the question is kind of one of those: is there or isn’t there an afterlife? I think it’s one that’s never supposed to be resolved, personally, and I like that, it’s so unexpected but it’s what Britten does best, actually: always takes us by surprise!”

November 2013 will be Britten’s anniversary month, with dozens of events and activities scheduled in the UK and abroad. A full programme until March 2014 is available at www.britten100.org