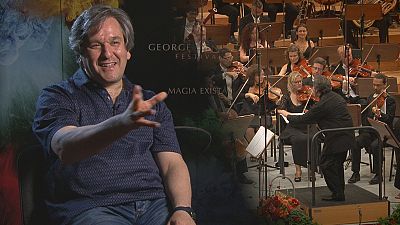 <p>How does a great orchestra move from city to city, from concert to concert? How do you pack up instruments and musicians and get them on the road?</p> <p>Euronews was given a unique insight into life on the road with one of Italy’s top orchestras, the Rome-based “Orchestra dell’Accademia Nazionale di Santa Cecilia”.</p> <p>It was invited with its critically acclaimed chorus and conductor Sir Antonio Pappano to perform at the at the prestigious Enescu Festival, in Bucharest. </p> <p>British born Sir Tony’s arrival in 2005 as musical director has had a huge, positive, impact on the orchestra.</p> <p>“What’s a lot of fun of course is when we are travelling together, is that I get to sit in the front, always, in the plane. I get to say hello to everybody who comes into that plane, that’s wonderful. Just travelling in jeans like they are, and just worrying about the concert, thinking about the music, and glad that we’re together; but that thing of saying ‘buongiorno’ to everybody is great, it’s important!</p> <p>‘Getting to really go to a variety of places, Japan, Russia, Romania, has been a reawakening of their – in a certain sense- their self-esteem, their self-regard. You get to be measured on an international stage, and there’s a certain amount of grit that you have to have for this and they have shown this grit!” </p> <p>In Italian culture Santa Cecilia is an example of excellence, and today ranks first among the greatest European orchestras for the number of tickets it sells.</p> <p>Sir Tony Pappano demands focus, precision from his musicians and the ability to renew their playing at every concert.</p> <p>Carlo Maria Parazzoli is the leader of the orchestra and gave an insight into those demands.</p> <p>“As soon as we start playing ‘standard’ – in a routine way -, he sees that, we too become aware of it and we all know that it can’t work. He demands freshness, and total involvement – always.” </p> <p>As rehearsals get underway Pappano walks into the hall and onto the stage, “Now you see why there’s a conductor here,” he booms to the musicians half-jokingly.</p> <p>“I don’t get angry at my orchestra… much” he laughs and adds “anymore,” and laughs again. </p> <p>Carlo Maria Parazzoli says: “being on a tour means performing each night in a different city, travelling every day, arriving, rehearsing and then giving a concert in front of a new audience. For each concert we have to find new energy. We cannot just give a bad performance of what we did the night before!”</p> <p>Sir Tony Pappano concludes: “I think my orchestra is very generous, they just pull out all the stops and deliver, and I think that this is great!” </p> <p>The Enescu Festival will end on September 28th: The Schubert Ensemble, Murray Perahia and the Royal Philharmonic Orchestra are scheduled on that date.</p>