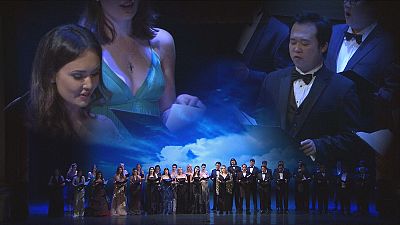 <p>In partnership with: <a href="http://www.medici.tv/" rel="external"><img src="https://static.euronews.com/articles/bonus/196086/logo-medici-tv.jpg" /></a></p> <p>Verona. A city of history, architecture, and a world-renowned opera festival. </p> <p>Recently, the Italian city hosted the twentieth anniversary staging of the most prestigious opera competition in the world – Operalia.</p> <p>This is a unique competition and generations of stars were first discovered at this contest. </p> <p>For 2013, six hundred singers sent in their demo tapes, but only twelve made it to the final, an exciting show where they performed to an international audience made up of both opera fans and professional experts.</p> <p>Behind this competition, a great artist’s generosity. Placido Domingo: “I’d always thought of creating a rather different opera contest; one where I knew I could follow up with the winners, not just ‘here’s the prize, now bye-bye’ but one where I could work with them, we could give concerts together, invite them to the theatres I’m involved with… it should be for encouragement, to help with the various difficulties of this job, and act as an accelerator for their career.” </p> <p>Tomorrow’s stars were judged by the crème de la crème of the world of opera production and management. </p> <p>One of the jury members is Jean-Louis Grinda: “Being part of the jury is a job but, above all, it’s a real pleasure because here you make wonderful discoveries, artists you didn’t know about before: young Chinese, Russians, South-Americans… Here I found singers I and my colleagues then invited to our opera houses. It’s terribly exciting when you first see a singer and think: ‘Wow! That’s a real talent!’”</p> <p>And one of the real talents was French soprano Julie Fuchs, who came second.</p> <p>But ultimately first prize went to a Russian soprano, Aida Garufullina. “I love opera, I live this music every time, every second… so I want to learn more, every day, new music, new arias… and do you know what is the most important thing? That people will love me, that’s what I’m dreaming about; not just to sing somewhere, just that people will love my acting, my voice, my soul.” </p> <p>In the men’s category the winner was an extraordinary Chinese bass-baritone Ao Li. He says he wanted to sing one aria, but was persuaded by Placido Domingo to sing another with more opportunity to show off his abilities: “Before the final I wanted to sing ‘Madamina’, from Don Giovanni, Leporello’s aria, the catalogue aria, but Maestro Domingo said: ‘if you sing Madamina you can play more, if you sing Aleko – which I did sing tonight – you can sing more’. Tonight I like blooming … it was so great!”</p> <p>Placido Domingo himself says he just likes to help aspiring singers: “It’s a privilege for me to be able to contribute to the growth of young promising artists into opera stars. It’s so fantastic to be able to help! Together, with all my family, we are working hard so that, God willing, this will on for ever.”</p>