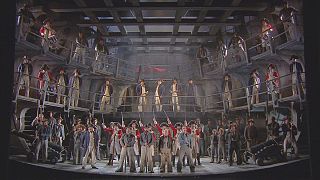 Billy Budd is back at Glyndebourne Festival!

It is one of the major works by English composer Benjamin Britten, whose birth centenary is celebrated this year. The opera tells the tragic story of the handsome, courageous and honest sailor Billy who is sentenced to death for unwittingly killing his superior.

Rising baritone star Jacques Imbrailo, who has the role of Budd, describes the pure and innocent character with whom he shares many similarities but also plenty of differences: “His way of seeing life, of seeing people, of reacting to things is different, which is why he stands out on the ship. He’s such a positive person, he sees the best in everybody, and I’d be lying if I said that’s me – he’s certainly a much nicer guy than I am. I do tend, when I get nervous, to stammer a little bit, so I can easily see how, when he gets nervous, he stammers… And I’m young, which helps as well, but that will only last so long!”

Captain Vere is played by Mark Padmore and explains that it is like being “caught between what seems like absolute evil in John Claggart and absolute good in Billy Budd.” He adds that “his character is somewhere in the middle” and is “sort of confused”.

The story is told from the perspective of the captain at the helm of a British battleship lost at sea and engulfed in mist – a symbol of claustrophobia and isolation.

Padmore describes how Captain Vere “recognises a love for Billy that is impossible.” He explains that “homosexuality is prohibited, it was even prohibited in England at the time the opera was written in 1951, so there is this sense that love between men is not possible, it’s forbidden, it’s taboo, but it can still be felt.”

Close to celebrating its eighty years of existence, the Glyndebourne Festival is also famous for the elegant attire of its public and the lavish picnic during the long interval.

Jacques Imbrailo says, “part of Billy’s character is that he strives for what’s right. Goodness is best, and what’s right is right. He loves things to be fair, and I think he understands that he’s killed a man therefore the law says he has to die. I think that’s almost more suited to his innocent character the fact that if that’s right, that’s right!”

This revival of Billy Budd was conducted by Sir Andrew Davies, a great interpreter and admirer of Britten’s: “His operas will very much stand the test of time in a hundred years from now. They’ll be performed as the masterpieces that they are. The passions and the problems that people get themselves into because their character doesn’t fit with other people’s characters was the topic that Britten was always obsessed with.”