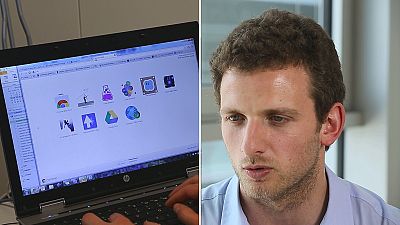 <p>We seem to be moving closer to a world where every aspect of our lives is recorded, whether we like it or not. And once our data is shared on the internet, we lose control over it…</p> <p>Facebook <span class="caps">CEO</span> Mark Zuckerberg thinks the age of privacy is over…but a team of Italian researchers is not so sure about that…They’re working on a mobile application that will allow users to regain control of their personal data.</p> <p>Mattia Pasolli is Application Developer at the project, known as the ‘Mobile Territorial Laboratory’.</p> <p>“All the people who don’t use Facebook because of privacy issues might use it, because they will know they have a sort of firewall that precisely tells them what information is being shared with external services.”</p> <p>The application is being tested with 80 families in Northern Italian city of Trento. Every family has a smartphone that collects data about their lives. </p> <p>Fabrizio Antonelli is Director of the Mobile Territorial Laboratory.</p> <p>“The instrument we used is called personal data store. It represents a sort of security box for data, where we keep all the information we collect about the person. Here, each person can see the life cycle of his or her own data, and see who has used that data, when, and for what purpose.”</p> <p>The research has been developed through the principle of “participatory design”. The application is developed by through the participation of the 80 families taking part. It’s a real community and they knew each other before the research. Erica is the manager of the community.</p> <p>Community Manager of <span class="caps">MTL</span> Erica Paris says it could be a learning experience for users.</p> <p>“People can learn a lot from this initiative, because through this project they realise the amount of data that is collected about them, including data from applications other than ours. It’s something that they did not know before”.</p> <p>The project is being developed by the <span class="caps">EIT</span> <span class="caps">ICT</span> Labs in Trento. The “Lab” is part of the Knowledge and Innovation Communities (<span class="caps">KIC</span>) – a research network supported by the European Union. Working together with private companies and research institutes, they try to fill the gaps between innovation and the market.</p> <p>Mattia Pasolli says Europe has a long way to go to emulate America. </p> <p>“In the United States, there are cultural factors that facilitate the creation of very innovative small start-ups. But in Europe the mentality of ‘trial, failure and trying again’ is not still totally accepted or part of our culture”.</p> <p>One of the goals of the project is to improve peoples’ quality of life through information and communication technologies. The researchers hope to anticipate the future trends in society. </p> <p>Fabrizio Antonelli says it could be time to think smaller…. </p> <p>“Social networks today are based on and create their user base through global communities, but it’s becoming increasingly important to re-evaluate the role of the local community. </p> <p>The local community knows the territory, and on that level, the trust is very strong compared to the level of trust on a global scale. In the community, the information is filtered by the people themselves, so it’s a form of local support.”</p>