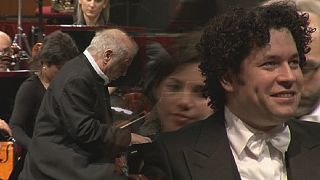 World-famous conductor Gustavo Dudamel has reunited with his colleague Daniel Barenboim for a concert celebrating the maestro’s 70th birthday.

For the occasion, Dudamel led the Filarmonica della Scala in the world premiere of Elliott Carter’s Dialogues II, composed for Barenboim.

Brahms’ sublime music did the rest.

“Barenboim treats me like a son, and of course he’s like a father to me,” said Gustavo Dudamel of his relationship with Daniel Barenboim.

“He’s also a great thinker: every time we talk, and I don’t mean when we rehearse, I learn so much. These last days, for example, have been wonderful, we’ve walked the streets of Milan, and he’s told me about his unique experiences: when he conducted Michelangeli, when he met Stravinsky, or Furtwängler.

“We’re talking about someone who has played a major role in the music of the 20th and the 21st century.”

On Brahms’ Piano Concerto No. 1 in D minor, Dudamel said:

“The piano’s first melody is initially played by the orchestra, it’s like a huge, symphonic, sound block the pianist has to play down gently while keeping the same symphonic intensity.

“Brahms always had this idea of the piano as a ‘massive’ instrument. The way he manages the piano’s colours as if it were a symphonic instrument is just wonderful.”

“I’ve never conducted a piece by Carter, this is my first time,” said Dudamel. “Maestro Barenboim showed it to me and said: ‘Carter wrote it for me, for my birthday, could we do it?’ And I said: ‘Of course, I’d love that to do that!’.

“It’s like travelling in time, it’s as if Brahms had suddenly jumped forward a hundred years or so,” he added.

Gustavo Dudamel, who is also Music Director at the Los Angeles Philharmonic, has been a guest at the world’s top concert halls. He has conducted for the Pope and even for the London Olympics, but it has never gone to his head.

“I’m just a musician,” he told euronews. “I feel strongly committed to music and the power it has to change people’s lives.”