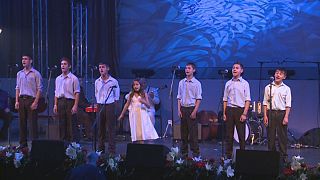 Generation Y goes behind the scenes with a group of young Roma artists from Slovakia at a concert in Brussels, the first time they had played outside their own country. It was organised by The Yehudi Menuhin Foundation with the support of the European Commission.

Marianne Poncelet, the Vice President of the International Yehudi Menuhin Foundation, explained the choice of venue: “The fact that we came to the Roma ghetto of Moldava Nad Bodvou with the ‘artist ambassadors’ of the Yehudi Menuhin Foundation, along with Ida Kelarova and her Roma musicians, was very powerful for the children because they had the opportunity to discover cultures around the world. At one point they learned Brazilian samba, something they never would have done if we had not introduced them to it.”

She continued: “We try to support collective creation through the arts, something that can change reality and give hope. If we work on ourselves and find strength in ourselves, find the resilience to get out of a difficult situation – I think that is possible through arts.”

Singer Ida Kelarova promotes integration through music and has created her own association in the Czech Republic. It teaches children music as a way of escaping poverty.

Marianne Poncelet told us that is essential: “There is work being done with the Roma communities to change the stereotypes that are very negative and should end. But, apart from giving money to local associations working with Roma people, governments from all the EU Member States should include in the curriculum for children in primary school classes on Roma culture. That would change everything. People would no longer be afraid of Roma people – they would appreciate them, and love them as I do. And I have known them for 20 years.”

In July, the children from Moldava Nad Bodvou will take part in workshops on video, and on Brazilian Capoeira with artists from different countries.