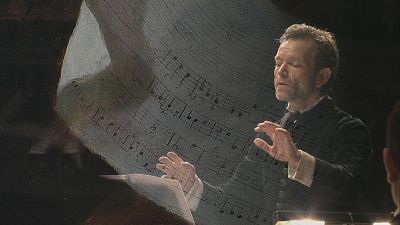 <p>It is in Saint German des Prés, the most Parisian of Paris neighbourhoods, where we meet Christophe Rousset. </p> <p>A renowned French harpsichordist, conductor and expert on the Baroque period, it is fair to say he is somewhat of a ‘musical archaeologist’!</p> <p>He talks to euronews about the pleasure he finds in his work: <br /> “ What I like about my job is to find a repertoire of sounds and elements which are essentially from the seventeenth and eighteenth century. For me there is no greater feeling than to revive works that have never been heard for centuries. Then, through the magic of music, suddenly it’s brought back to life by the performers. It’s an absolutely amazing feeling and comparable to that of an archaeologist who unearths a Greek vase and finds the answer to a myth.”</p> <p>Christophe Rousset recently celebrated the twentieth anniversary of his outstanding period orchestra, Les Talens Lyriques.</p> <p>Their repertoire covers pieces such as Lully’s long overlooked lyrical tragedy Bellérophon, as well as some of Baroque’s better known ‘hits’ like Rameu’s lyrical comedy Platée. </p> <p>As Christophe Rousset sees it:<br /> “The most wonderful thing in the world today is the ability to see the flow of information and beauty.</p> <p>He goes on to point out:<br /> Being a musician, being an artist in general, is a way for me to spread beauty, which is important to me. It’s through art that we can exalt our human nature and it’s this world of Muses, all of them, that makes us different from animals.” </p> <p>He believes a performer is above all someone who passes on art but is at the same time, a creator:<br /> “Performers have to make art perceptible. They have to make it moving and do it justice. This type of collective emotion is something that can only happen during a live concert and it’s much more than sheer enjoyment, we do have fun but we also are transported to a different place. We are enriched, and exalted to the point where one ends up wondering: well, maybe I am an artist myself!’” </p> <p>He concludes music will always have a place in the world if we choose to use it wisely: <br /> “Unfortunately the prospects for the 21st century are rather gloomy but it’s exactly when the chips are down that art can be a consolation. Salvation can come through art, this is something I strongly believe in, that’s why I don’t think that this is a time of crisis for art, on the contrary, art will flourish but on the condition that we resort to it to dress our wounds.” </p> <p>In this story it is possible to hear segments of the following works: Bellérophon by Jean-Baptiste Lully, and Platée by Jean-Philippe Rameau.</p> <p>For more excerpts from our interview (in French) with conductor Christophe Rousset please click on the following link:<br /> <a href="http://fr.euronews.com/2012/03/05/extraits-de-linterview-de-christophe-rousset">http://fr.euronews.com/2012/03/05/extraits-de-linterview-de-christophe-rousset</a></p>