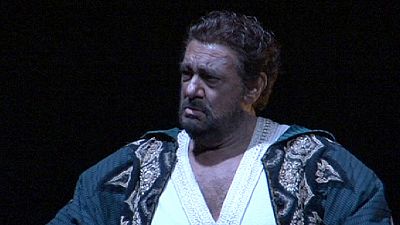 <p>Othello is a tragic hero on the stage and in opera and is the protagonist of Verdi’s masterpiece. At the Royal Opera House, Covent Garden he is brought to life by one of the Opera’s greatest interpreters – Placido Domingo.</p> <p>“In the last Act of Otello, his sadness, his anguish, his frustration… it cannot be compared to that of any other character. That moment, after surrendering his sword, which is sad too, is when he says ‘Otello fu’, Otello is no more,” he says and adds “And then he realizes what he’s done: ‘E tu come sei pallida, e stanca, e muta, e bella’ … (You are so pale, and weary, and silent, and beautiful), the person who really loves him, who was innocent. It is the worst tragedy, the saddest moment ever: his becoming aware that he’s committed an enormous crime and then he says to her: ‘before killing you, dear wife, I kissed you; now that I’m dying, I kiss you one more time’.” </p> <p>A tenor, a baritone, a conductor, an artistic and music director, Domingo has recently celebrated 40 years since his debut at London’s Royal Opera House Covent Garden.</p> <p>Musica has been able to film the dress rehearsal of the Otello section in a three-part celebratory show. </p> <p>Domingo has shared some of his recollections of the many singers and conductors met on the stage of Covent Garden: Carlos Kleiber, for example.</p> <p>“Kleiber was electrifying, singing with him was almost dangerous because you didn’t know whether the public was looking at the stage or at the conductor! How can I put it, he was a sea-storm – and Otello itself starts with a storm! – a sea-storm, an ocean. I’ve never heard anything like that, you cannot believe one can create such an atmosphere. It was amazing. This was Kleiber,” he said. </p> <p>Antonio Pappano is one of today’s most acclaimed conductors. He’s also the music director of the Royal Opera House.</p> <p>“In this 40 Year Celebration I’m getting to do the fourth act of Otello with him, it was always my dream to do Otello with him. Placido is a musician who, when he enters the room, and when he takes part in a rehearsal or performance, he makes everybody around him better – this is a very special quality, and very few people have it. There are a lot of people who go out and take all the limelight – and he can, because he is a star – but he makes everybody around him better, and this is an amazing quality. He’s a monument, there’s no question,” explained Pappano. </p> <p>It is also undisputed that Placido Domingo’s career is matchless. In Covent Garden alone he’s sung 26 roles and has been in dozens of productions – 40 triumphant years!</p> <p>For more excerpts from our interview with Placido Domingo (in Spanish) and with Antonio Pappano (in English), please click on the following link: <a href="http://www.euronews.net/2011/11/02/bonus-interview-placido-domingo-and-antonio-pappano">www.euronews.net</a></p>