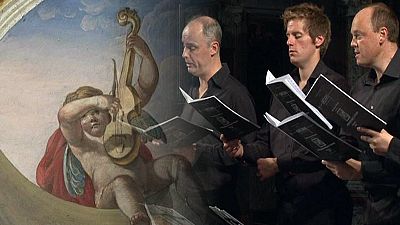 <p>The Requiem by Spanish composer Tomás Luis de Victoria is a masterpiece of Renaissance vocal music. </p> <p>It brought the curtain down in glorious fashion on the 66th staging of ‘Sagra Musicale Umbra’, Umbria’s Musical Festival, one of Italy’s oldest events devoted to classical music.</p> <p>The Tallis Scholars, the world acclaimed British ensemble who specialise in sacred vocal music, performed there under the direction of Peter Phillips, the group’s founder.</p> <p>“The Victoria Requiem sets the ultimate text; it is dealing with the great profundities and it is a mixture of beautiful surface and great depths. It creates a kind of calm that the modern world tends not to have. People are taken out of their lives and are put in a calmer space,” he explained</p> <p>Alto, Caroline Trevor gave her view on the power of the music and words. </p> <p>“The music in itself is powerful enough most of the time to bring out a really meaningful interpretation whether the people singing it truly believe it or not. I think they can believe in the music not necessarily believing totally in the words, but it may help if you believe in the words too.” </p> <p>By tradition the Festival’s concerts, 14 this year over nine days, take place in some of the most spectacular churches in Umbria – in this case it is St. Peter’s Basilica, in Perugia.</p> <p>“I think most of the audience when they listen will discover the supreme beauty of Victoria’s Requiem, a piece that seals the great period of Renaissance vocal music. Besides, the concert venue is the perfect architectural, artistic and visual match of the music and words which they will listen to,” said Alberto Batisti the Festival’s Artistic Director. </p> <p>Alberto Batisti is a cultivated, unconventional scholar, who is not afraid of exploding the inane myths surrounding the world of music.</p> <p>“There’s an insane, perfidious, idea circulating in the mainstream media too, whereby music should be something played in the background, a comforting accompaniment of everyday life, and <span class="caps">NOT</span> a ‘language’, something which tells a story, however abstract, generated by complex thinking as well as by your soul.” </p> <p>In this story you can hear segments taken from ‘Officium Defunctorum (Requiem)’ by Tomás Luis de Victoria.</p> <p>A special thanks to ‘Fondazione per l’Istruzione Agraria in Perugia’ and the Benedictine order that granted permission to film in St. Peter’s Basilica.</p>