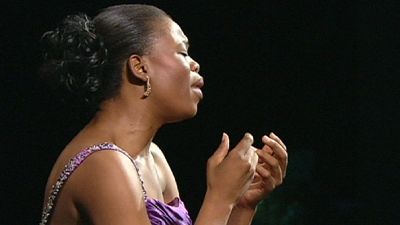 <p><a href="http://www.medici.tv/">In partnership with: <img src="http://www.euronews.net/media/download/Medici_logo.jpg" width="150" height="28" /></a></p> <p>It is the most important classical voice competition of contemporary times. ‘Operalia’ was founded in 1993 by none other than the great Spanish tenor Plácido Domingo. This year he brought the annual talent factory to Moscow. Winning means a first-class ticket to a future in the opera world. </p> <p>“It is my dream. I continue to perform, I’m acting, singing and conducting but the most important thing for me now is Operalia,” Domingo told euronews.</p> <p>Each year the competition travels to a different city. This year, for the first time, it went to Russia. Only 13 budding new talents made it to the finals in Moscow.</p> <p>Plácido Domingo offers support to the contestants during the preparations. In the finals it is the maestro himself who picks up the baton.</p> <p>For 26-year-old South African winner Pretty Yende, the chance discovery of opera 10 years before changed her life forever. </p> <p>“The first time I heard opera was in 2001. I was at home with my family and we were watching TV and there was an advert on TV and there was this music behind and it was just 10 seconds but those 10 seconds gave me something that I knew that I should have but I didn’t know what it was. And so I went to my high school teacher the following day and I asked him : ‘I heard this on TV, what is it?’ He told me that it was called opera. And I said: ‘So it’s something that anyone can do? Like is it human because it is something so supernatural?’ “ </p> <p>For many years Pretty Yende worked hard on vocal training, like the other competition hopefuls. </p> <p>The famous Russian opera singer Galina Vishnevskaya is a jury member. She admits just having a nice voice is not enough: “If the singer doesn’t master his voice, his apparatus, if he doesn’t have the technique, even if he’s very talented and has a sense of the music – he then is absolutely helpless, he can’t do anything, he can’t express what he wants, he will be zero.” </p> <p>And there is another secret to success, besides technique: holding one’s nerve. Everyone prepares differently for the big moment. René Barbera wanted to apply for years. Finally, this year, the 27-year-old American found the courage. </p> <p>“Unbelievable. I feel great. I can’t believe that I won anything to begin with and then three prizes and now the top prize, it is just unbelievable. There is quite a bit of pressure, there are a lot of big names up there, but I try not to think about it.” </p> <p>Plácido Domingo said: “To see great voices is always fantastic. When I see talent I really feel so much emotion, because I know how difficult it is. We sing somewhere else. It is a very hard career. It is very difficult and when I see this fabulous talent here, it makes me so proud.”</p> <p>Pretty Yende is singing at the world famous opera house La Scala in Milan. Winning Operalia is an important milestone in an already illustrious and unanticipated musical journey. </p> <p>In this edition of Musica you can hear excerpts from: </p> <p>‘O mie fedeli… Ah, la pena in lor piombò’ from Beatrice di Tenda by Vincenzo Bellini, </p> <p>‘Ah mes amis… Pour mon âme’ aria from La fille du régiment by Gaetano Donizetti.</p> <p>‘La tempranica: Sierras de Granada’ by Gerónimo Giménez</p>