Hugo Ramirez never thought that one day he would have to turn to food aid. After all, he has a permanent job in the construction industry.

But record inflation has pushed the bricklayer to take the plunge: otherwise, it would be impossible to make ends meet.

"We see prices going up every week, even on basic products... We can't manage it anymore," says the 44-year-old, standing in front of pallets of fruit and vegetables at the foot of a large brick building in the south of Madrid.

Every Saturday, he comes to collect food from an association created during the pandemic in the working-class neighbourhood of Aluche to help residents in difficulty. 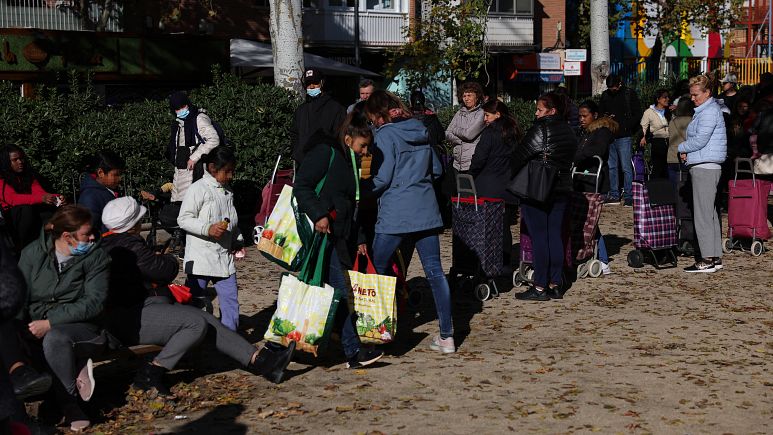 Every weekend, thousands of people like Hugo queue up at various places in the Spanish capital to get food. Back at the start of the pandemic, Euronews' Spanish service reported on the so-called "hunger queues" springing up across Madrid. Since then, the phenomenon has been compounded in recent months by soaring inflation.

"Every week we see new families in need, especially since the war in Ukraine," Raul Calzado, a volunteer with the Mutual Aid Network of Aluche (Rama), told AFP. He says he has seen mothers "stopping buying feminine hygiene products so they can feed their children".

The association currently helps 350 households, distributing seven tonnes of food a week with the help of the food bank. Raul predicts that at this rate the number will rise to 400 by the end of the year.

A dozen volunteers are busy in a room filled with pasta, canned food and nappies. Others take care of families lined up outside, many of them immigrants.

"Some of the recipients have no income. But we also have more and more pensioners with small pensions or people who work but whose pay is insufficient," says the association's vice president Elena Bermejo. "For some families, even buying a litre of olive oil or a kilo of lentils has become difficult."

According to Spain's National Statistics Institute, food prices rose by 15.4% year-on-year in October, the worst figure for nearly 30 years. The price of sugar even jumped by 42.8% and vegetables by 25.7%.

The left-wing Spanish government has multiplied measures in recent months to help people with the cost of living. But welfare groups say they're not enough.

"With inflation, we are seeing a drop in donations," says Luis Miguel Rupérez of the Spanish Federation of Food Banks. "The problem is that with rising prices, we can buy less food."

The organisation helps more than 186,000 people in the Madrid region and 1.35 million in Spain as a whole -- almost the equivalent of a city like Barcelona. But since January, it has collected 125,000 tonnes of food compared to 131,000 tonnes in the same period last year.

According to a study published in early 2022 by the University of Barcelona, one in seven Spanish households is faced with "food insecurity" due to a lack of access to healthy and nutritious products. Few see the situation improving in the short term in a country faced with chronic precariousness.

Hugo Ramirez, bag of food in hand, says he hopes "it will get better" but is "afraid it won't". He draws a comparison with his native Venezuela, which has been plagued by unbridled inflation for the past ten years.