Some 700,000 Ukrainian soldiers are now actively participating in defending the country, Ukrainian President Volodymyr Zelenskyy said in a televised interview on Saturday.

In comparison, Russia deployed anywhere between 100,000 to 190,000 troops when it launched its invasion on 24 February, with the exact numbers of currently active units unclear.

Meanwhile, the Moscow forces continued their assault in the east after claiming victory in Mariupol on Friday as the last Ukrainian defenders holed up in Azovstal laid down their arms.

Read more about the day's developments in our live blog below.

That's it from the live blog for tonight -- join us again on Sunday morning for more updates on Russia's war in Ukraine.

Costa met President Volodymyr Zelenskyy in Kyiv on Saturday and said he wants to help his EU partners find alternatives to Russian oil and gas.

The prime minister stressed the need to be completely independent of Moscow and "a total block of all energy sources from Russia which is the best way to not continue to finance Russian war efforts".

In the same press conference, Zelenskyy reminded the international community that the Donbas region remains part of Ukraine and that war will not be waged on Russian territory.

"You see, we just can't pay the price of tens or hundreds of thousands of lives, so we ask you to help us. These multiple-launch rocket systems, which stand in some countries at a standstill -- they are the key to our survival" Zelenskyy said.

Member of the Russian delegation in negotiations with Ukraine Leonid Slutsky said that Russia would consider exchanging Ukrainian soldiers who surrendered earlier this week after being holed up in Azovstal for the pro-Kremlin member of parliament Viktor Medvedchuk.

Medvedchuk, who was caught by the Ukrainian security services after he tried to escape the country on 12 April, is currently under arrest pending trial for treason.

'Saint Javelin' mural to be painted in Kyiv

The mural will be the first of a series on Antonova Street, according to former deputy of the Kyiv City Council Andriy Andreev.

"Saint Javelin" has become one of the most popular images illustrating the Ukrainian resistance to the Russian invasion, with Ukrainian President Volodymyr Zelenskyy and Minister of Defence Oleksii Reznikov both sporting the design in recent weeks.

Film by Lithuanian director killed in Mariupol premieres at Cannes

The rare documentary which serves as the last testament of the late Mantas Kvedaravičius chronicles Mariupol's survivors seeking refuge amongst the ruins.

The Lithuanian director was killed on 2 April while filming the project. He was arrested by Russian soldiers when he attempted to leave the city and reportedly murdered.

The film was completed by co-director and Kvedaravičius' fiancée Hanna Bilobrova in record time. It was added to the competition as a late entry in celebration of his life before a special screening last Thursday. 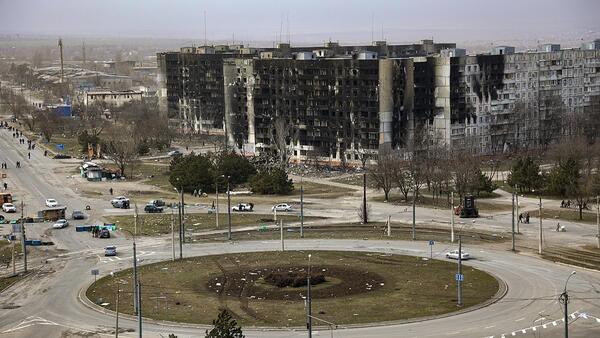 Chessmaster and prominent dissident Gary Kasparov was added to the list of "individuals acting as foreign agents", according to the Russian Justice Ministry website -- a designation heavily criticised as a violation of human rights and a means of suppression of civil society actors and journalists.

Kasparov, who was added to the list on Friday together with another prominent critic of President Vladimir Putin's regime, former oil tycoon Mikhail Khodorovsky, responded by saying that the "'Russian Justice Ministry' is an oxymoron under Putin."

"I was representing my country back when Putin was still spying on his colleagues in East Germany," Kasparov said on Twitter.

"Being anti-Putin is, and always will be, pro-Russian," Kasparov concluded.

Both Kasparov and Khodorovsky have been campaigning against Russia's war in Ukraine, while also organising supporting humanitarian relief programmes.

Russia is likely experiencing a shortage of reconnaissance drones, which it has used to identify targets to be struck by combat jets or artillery, the UK Ministry of Defence said on Saturday.

This is exacerbated by limitations in its domestic manufacturing capacity resulting from sanctions, the report said.

If Russia continues to lose UAVs at the current rate, Russian army intelligence, surveillance and reconnaissance capabilities will be further degraded, negatively impacting operational effectiveness, the ministry said in a regular bulletin.

A large batch of weapons "received from the United States and Europe" was destroyed in a missile strike against a target in the Zhytomyr region, the Kremlin claimed on Saturday.

The Russian Ministry of Defence released the footage purported to show the launch of the Kalibr missile from the Black Sea, said to have destroyed the stockpile, the state-owned agency Interfax reported.

The claim could not be independently verified.

US President Joe Biden has signed into law legislation passed by Congress on Thursday providing a massive $40 billion (€37.8bn) package for Ukraine's war effort against Russia, the White House said on Saturday.

Biden signed the bill during his official trip to South Korea. The bill includes $6bn (€5.68bn) for Ukraine to buy armoured vehicles and strengthen its air defence.