Incumbent Prime Minister Viktor Orbán has won a fourth consecutive term in office -- his fifth in total -- after a dominant performance at the polls from his nationalist Fidesz party.

Six opposition parties had rallied their efforts to unseat Orbán behind one candidate, Péter Márki-Zay.

However, on polling day their support faltered and they proved no match for Fidesz which has secured another two-thirds majority in parliament.

With around 91% of votes tallied, Orban’s Fidesz-led coalition had won 53%, while a pro-European opposition coalition, United for Hungary, had just over 34%, according to the National Election Office.

1. The war in Ukraine helped Orban and Fidesz

The victory comes as war rages in one of Hungary's neighbouring countries, Ukraine, suggesting Orban has benefitted from the "rally around the flag", which sees voters favour incumbent political leaders at times of international crises.

Orban dramatically shifted the tone of his campaign after Russia invaded Ukraine in late February, portraying the election as a choice between peace and stability or war and chaos.

The opposition called for Hungary to support Kyiv and act in unison with the European Union and the military alliance NATO.

But the main message carried on pro-government media claimed the opposition wanted to drag Hungary into the conflict.

Orban, a longtime ally of Russian President Vladimir Putin, has insisted that Hungary remain neutral and maintain its close economic ties with Moscow, including continuing to import Russian gas and oil on favourable terms.

At his final campaign rally Friday, Orban claimed that supplying Ukraine with weapons — something that Hungary, alone among Ukraine’s EU neighbours, has refused to do — would make the country a military target, and that sanctioning Russian energy imports would cripple Hungary's own economy.

Click here to see Monday's latest updates on the war in Ukraine.

2. No end in sight for Hungary's scraps with Brussels

Hungary under Orban has long been at loggerheads with the European Commission in Brussels over issues such as immigration, judicial reforms and media freedom.

This result gives Orban, and his government, a strong mandate to say that Hungarians voted and want them to continue running the country the way they have been, especially when it comes to dealing with European institutions in Brussels.

In his victory speech on Sunday, Orban wasted no time in sending a message to Brussels.

“We won a victory so big that you can see it from the moon, and you can certainly see it from Brussels,” said Orban.

It comes after the European Commission got the legal green light to stop transfers of EU funds to countries that don't adhere to the bloc's core values. It's aimed at the likes of Hungary and Poland and is likely to be a key battleground in the coming months.

3. Hungary's urban-rural divide looks as strong as ever

The results show that Hungary is still divided politically. In the capital Budapest, the six unified opposition parties won the biggest share of the vote. Fidesz dominated elsewhere in the country.

The vast majority of Hungary's opposition to Orban had unified behind one candidate -- Péter Márki-Zay -- in a bid to oust the country's long-term prime minister.

Among them was Jobbik, a once far-right party that has moved more mainstream in recent years.

But support for Jobbik -- whether because of this shift to the centre-ground or being in a big-tent opposition diluted its impact -- dropped off on Sunday night.

Voters seem to have switched to Our Homeland Movement (MiHazánk), which came to prominence during the pandemic as an anti-vaccine party.

In a surprise result, the party exceeded the 5% threshold to enter Hungary's parliament.

As well as the election, Hungarians were also asked to give their opinion on a controversial LGBT referendum.

Voters were asked for their views on legislation that limits schools' teaching about homosexuality and transgender issues.

The government's response was to offer a referendum, asking the electorate four questions in relation to the legislation.

To be valid, the poll needed to be answered by half of Hungary's registered voters. But with 98% of votes counted, the threshold had not been met. However, of those that did respond, the vast majority backed the government's position.

Scroll through our updates below to see how Sunday's election night unfolded.

That's the end of our live coverage of the Hungarian election results. Thanks for following along.

You can see how the night unfolded from the moment the polling stations closed, to the first victory speech, below.

Matteo Salvini was among the first EU politicians to congratulate Viktor Orbán on his win in Sunday's elections.

Fidesz on course for two-thirds majority

The ruling Fidesz party of Prime Minister Viktor Orbán looks to have secured yet another two-thirds majority in parliament.

Earlier, as counting got underway, opposition MPs said they thought it was unlikely Fidesz would repeat the result the achieved in the last three elections of securing more than two-thirds of the seats in Hungary's parliament.

Full and final election results are not expected to be officially verified until later this week.

There were other elections taking place in Europe on Sunday, with voters going to the polls also in Serbia. 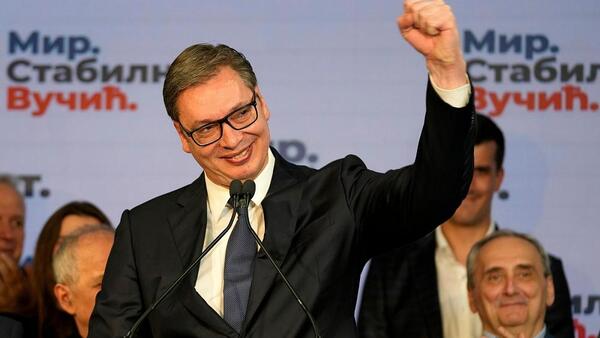 The results show Hungary is divided politically, into the capital Budapest where the six unified opposition parties won the biggest share of the vote; and the rest of the country where Fidesz largely dominated.

As we mentioned earlier in the blog, in addition to parliamentary elections, Hungary also held a controversial referendum on LGBTQ rights on Sunday.

Voters were asked for their views on legislation that limits schools' teaching about homosexuality and transgender issues. Critics say the law, passed last year, was discriminatory, contravened European values and equates homosexuality with paedophilia.

Under Hungary's election law 50% of eligible voters need to cast a ballot... and 50% of those ballots cast need to be valid, ie: not spoiled in some way.

From the current official referendum results it seems like those thresholds haven't been met.

It looks like Viktor Orbán has won -- but is this really a victory for democracy?

The result of Hungary’s parliamentary elections won’t fully represent the will of the people because “it’s not a real democracy”, a political scientist has warned.

Speaking to Euronews ahead of Sunday’s vote, Péter Krekó, executive director at Political Capital, said that he hopes that the world puts the result into context. 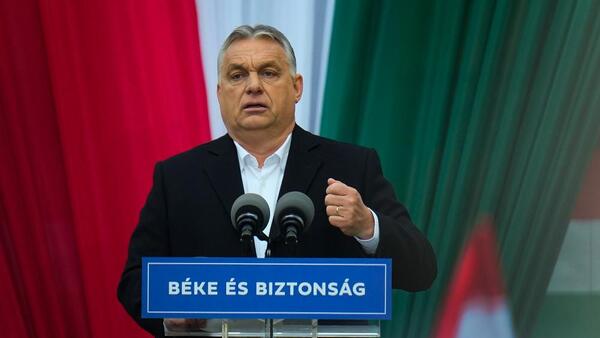 euronews🇭🇺 Euronews spoke to a political scientist about Hungary's upcoming parliamentary elections and what they might mean for Europe.
23:20

With around 80% of the national list votes counted, Hungary's PM Viktor Orbán has been addressing his supporters.

"How is it that we won the most when everyone was united against us?" he asks rhetorically, a nod to the six opposition parties which united under one leader in the hopes of getting enough votes to unseat Orbán.

He also said that this victory will be remembered also because they had to face the biggest "headwind", with the Ukrainian president Volodymyr Zelenskyy listed among his 'enemies'.

Viktor Orbán speaks: 'We've won a victory so big [...] you can certainly see it from Brussels"

Hungary's Prime Minister Viktor Orbán has given a speech to supporters as it looks certain his nationalist Fidesz party is on course to win today's general election.

"We've won a victory so big that you can see it from the moon, and you can certainly see it from Brussels" he said on Sunday evening.

"Don't be afraid, hold on, the motherland is with you" Orbán said, with around 70% of the votes counted.

Orbán has routinely been at odds with Brussels over a crackdown on independent media outlets, and for adopting anti-LGBTQ policies.

Viktor Orbán's party heading for another term in office

Nationalist Prime Minister Viktor Orban's party led the Hungarian legislative elections on Sunday, heading for a fourth term in a row, according to the first partial official results published by the National Electoral Bureau (NVI).

With 60% of the votes countes, Fidesz was ahead with 55.75%, while the combined six opposition parties running under a unified list were on 32.55% of the vote.

Analysts had predicted a much closer battle.

The ballot was marked by a turnout of 68.7%, a figure close to the record of four years ago.

Ballot counting is still not finished in the bigger cities, but if this result were to be confirmed, it would mark an increase for Fidesz and its Christian Democrat allies, who had won a total of 49.27% ​​of the votes in the previous election in 2018.

The full official result will only be known during the week, after the counting of hundreds of thousands of votes from voters from the diaspora as well as expatriates.

The Hungarian legislative voting system combines simple majority by constituency seats and proportional representation, a system implemented for the first time in 2014 and favoring, according to analysts, Fidesz in power.