Ascensión Mendieta searched for her father’s remains for 78 years.

She was able to find their resting place in Spain after travelling over ten thousand kilometres to Argentina and joining a cause that forced the Spanish state to act on past crimes against humanity.

The excavations of two mass graves in the last two years allowed the Association for the Recovery of Historical Memory (ARMH) to recover the bones of 50 victims of forced disappearance. 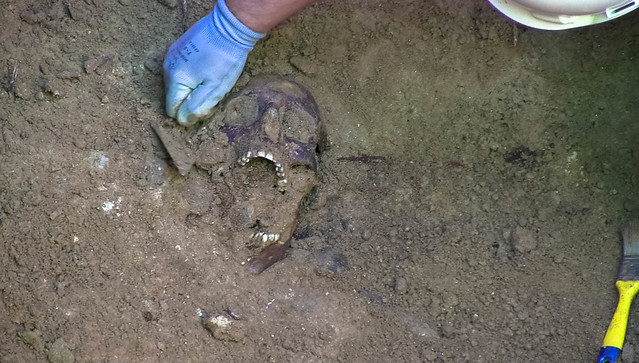 David is a volunteer at the ARMH, who is in charge of operating a metal detector in Guadalajara graveyard, 70 kilometres from Madrid. He is looking for bullets.

After cursing several false alarms, David found the lead interior of a Mauser bullet and five minutes later the detector beeped again: It was a 9 mm pistol cartridge.

“And with this (bullet), they gave the ‘coup de grâce’,” he explained.

David took leave from his work as an environmental manager and joined the ARMH team, one of the most important organisations in the country, that, among other tasks, unearths and identifies the remains of the victims of Spain’s infamous Francisco Franco, who ruled the country for 36 years.

On June 9, twelve days after excavations finished, Madrid’s genetics laboratory announced that among the samples extracted by the association there was a match with Timoteo Mendieta’s DNA.

The group had been searching for him for over two years.

In 2016 they began excavating a mass grave, registered under the name“Fosa 02”, they recovered 22 bodies but none belonged to Timoteo.

All of the skeletons showed clear signs of torture and ultimately execution.

In 2017, after another court order, the group obtained permission to open “Fosa 01” and this time the skeletons of 24 victims were recovered, once again showing marks indicating forced disappearance and murder.

The osteological and DNA analyses indicated that Mr Mendieta was the first body taken out of “Fosa 01”.

There are 16 additional mass burial sites in this graveyard alone.

Timoteo’s case was brought to the public’s attention on April 14, 2010, when human rights organisations from Spain and Argentina, together with Nobel Peace Prize Laureate Adolfo Pérez
Esquivel, filed a complaint in Buenos Aires.

The case, started thousands of kilometres away from his burial site, helped move the investigation into Franco’s dictatorship and its crimes against humanity forward.

“Crimes against humanity should not lapse,” said the Argentine Judge María Romilda Servini de Cubría, who tried to use international law and international agreements to which Spain had subscribed, to bring the case to fruition.

The Mendieta family joined the Argentine case in an attempt to pressure their country’s government into finding Timoteo.

He had been a delegate of the General Union of Workers (UGT) – a large Spanish trade union, previously affiliated with the Spanish Socialist Workers’ Party.

In 1939 Timoteo was abducted and after several days in prison was executed with his body buried in the mass graves of Guadalajara, where it lay for 78 years.

A second round of excavation work took place in the cemetery in May 2017, carried out by archaeologists, all volunteers and members of an organisation that does not receive state support.

They started work in the knowledge – thanks to the cemetery’s burial records – that there was a mass grave under every headstone.

The records also informed them that each pit was four meters deep and contained between 20 and 25 bodies, piled on top of each other in groups.

“Mendieta was thrown into a pit but registered in another,” said an ARMH spokesperson.

The legal action taken by the Mendieta family is unprecedented in Spain: They travelled to another country to initiate international criminal proceedings and forced the hand of courts in their home country to act upon allegations of crimes against humanity.

Pablo de Greiff is the United Nations Special Rapporteur on the promotion of truth, justice, reparation and guarantees of non-recurrence.

In August 2012, after visiting Spain, he wrote in his report: “The biggest voids are evidenced in matters of truth and justice”.

“The Special Rapporteur’s notes with concern, that a state policy for the promotion of truth has never been established and that Law 52/2007 (Law of Historical Memory) does not solve this problem at all,” he continued in the text.

The UN envoy concluded that the Spanish state does not recognise what happened during the Civil War and the dictatorship, with no official censuses of victims and no official data or estimates on the total number of deaths.

In 2016 the government of Mariano Rajoy cut the budget for the exhumations, which used to fund the work or the ARMH and since then the group has to rely solely on private donations and the work of volunteers.

In 2016 the journalist Jordi Évole interviewed Rajoy and asked him about the Spaniards who still do not know where their grandparents are.

“It would be great for everyone to know where their grandparents are buried, but I am not sure what they are saying is true, nor that the government can do anything to fix it”, he replied.

“I just want my father’s bones. I want to be able to bury him and when I die I want to be buried next to him”, Ascensión Mendieta told the press a few days before receiving notification from the Laboratory that her father had been found.

In Spain, there are more than 116,000 people who met the same fate as Timoteo. They are lost to the world.

Even in the final days of the search, the team continued to find the shattered projectiles that soldiers used to shoot Republicans in front of a firing block.

Beneath the ground, countless skeletons await their turn to be found in the name of justice and memory.