US authorities are investigating possible links between gunmen shot dead by police at an anti-Muslim event near Dallas and international terrorist groups, a US government source said.

The source said the FBI and other US agencies believed the incident on Sunday could have been instigated or directed by foreign-based militants such as the group calling itself “Islamic State” (ISIL), which operates mainly in Syria and parts of Iraq.

Police in Garland, Texas, said they had planned security for months around the controversial exhibit and contest, and that a bomb squad, the Federal Bureau of Investigation, a SWAT team and the US Bureau of Alcohol, Tobacco, Firearms and Explosives were all in place on Sunday night in case of any incidents.

Police worked with the FBI to determine if the attack was a terrorist incident. No bombs were found in the attackers’ car, police said.

“Obviously they were there to shoot people,” Garland, Texas police spokesman Joe Harn said at a news conference. “He did a good job,” referring to the police officer who shot the attackers dead with his duty pistol.

Citing a senior FBI official, ABC News identified one of the gunmen as Elton Simpson, an Arizona man who was the target of a terror investigation. FBI agents and a bomb squad were searching Simpson’s Phoenix home, ABC said.

The event in Garland, Texas, organized by American Freedom Defense Initiative (AFDI), was called “Muhammad Art Exhibit and Contest” and offered a 10,000 dollar prize for the best artwork or cartoon depicting the Prophet.

The event featured speakers including Geert Wilders, a polarising Dutch politician and anti-Islamic campaigner who is on an al Qaeda hit list.

The AFDI, described by the Southern Poverty Law Center as a hate group, has among other activities sponsored anti-Islamic advertising campaigns in transit systems across the country.

Depictions of the Prophet Mohammad are considered offensive in Islam, and Western art that portrays the Prophet has angered Muslims and provoked threats and attacks from extremists.

ABC News said officials believed Simpson sent out tweets ahead of the attack, with the last one using the hashtag #texasattack. It said, “My bro and myself have given bay’ah to Amirul Mu’mineen. May Allah accept us as mujahideen. Make dua.” 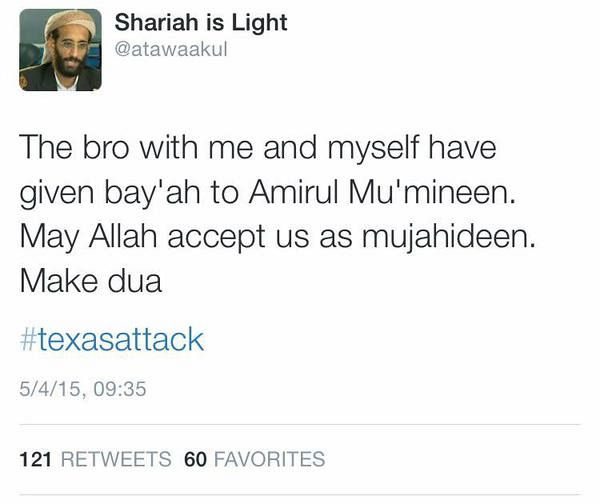 “Bay’ah” means “oath of allegiance” in Arabic, and “Amirul Mu’mineen” is “commander of the faithful,” a title of caliphs and other Muslim rulers. “Dua” means “supplication.” The tweet was pulled from Twitter after the attack.